I can more than relate to the Jelmer’s blog post about annoying situations where this or that content is not available for people outside US. The other day I wanted to buy a book (fiction), the ‘teaser’ on the Amazon site got me interested. After clicking on “Buy with one click” on my Kindle I got this: “This title is not available for customers from your location in: Slovenia”. Why the hell not? I’m quite sure Amazon is not the one to blame for this… 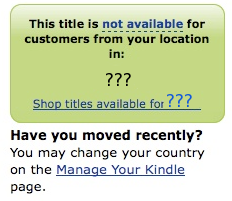 Why don’t publishers finally embrace the e-change and work with it not against it? Why? I don’t frikin get it. Is it about the money? Yes? Then this is one of the reasons WHY they SHOULD change. Opening up might mean lower prices in short-term, but it brings more readers, more customers in the long term. If it’s about the politics… we’re screwed.

Authors, if you want to reach audience outside US use worldwide-Amazon-friendly publishers or use Amazon self-publishing … or any other non-discriminatory publishing service. Howgh.

Sorry, this blog post is not available in your country.

January 29, 2012 in Internet , Personal with 7 Comments It would be unimaginable. Unthinkable. Only making my blog available to people using the internet from within The Netherlands. Imagine you would only be able to visit websites hosted in your own country. This would drastically change the way and scale we use the internet.

If you want to introduce a really huge change into the system, you do it slowly, gradually, step by step, so that people don’t see it coming. It’s not the musicians who will benefit from this all, but all the record houses and all the others who refuse to change themselves, their policies, their way of doing business. It’s much easier to enforce more rules and laws. It would be much better if they would instead try to introduce changes into their mental models.

We used to say “Only in America”… but we don’t anymore. It’s happening everywhere.

Members of Poland’s Parliament hold up Guy Fawkes masks, symbolizing protests by Anonymous, to protest ACTA. A new photo is doing the rounds on the Internet. It shows members of the Polish parliament holding print-outs of the notorious Guy Fawkes mask in front of their faces, homage to an unofficial symbol of the Anonymous cyber collective.

I’m afraid we are once again at the verge of something huge, something terrible… people all around the world are pissed off or depressed and racism is pouring out of every crack in the illusion of “wars from past taught us a lesson”, whether we want to see it or not. Assange pairing up with Russia’s State-Run TV? It seems to me that each party in this ‘strange’ arrangement has a hidden agenda. We’ll see.

It’s the television channel that has given voice to a thousand anti-western conspiracy theories, while avoiding criticism of the hand that feeds it. Now state-run Russia Today, the Kremlin’s English-language propaganda arm, has forged an unlikely partnership – with the self-proclaimed defender of truth and freedom Julian Assange.

Anyone with a grain of salt in the head would think twice before letting social media replace CRM system. 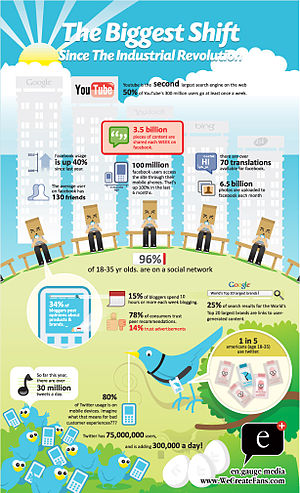 I’m not an expert in this area but… c’mon. Let’s think about some things I observed in last few years:

As Matthew said: do keep in touch through it, but don’t rely on it. :)

Why social media does not replace a CRM system

Matthew Collis | 2012/01/24 | 0 Comments Social media as the silver bullet? You’re using social media, and at this point, keeping in touch with your sphere of influence (SOI) through Facebook and Twitter is nothing new. Therefore, a database or contact management system isn’t really required, right? Well, not so fast.

My first set of Lego bricks from childhood is no longer in my “toys inventory”, but memories are still here. Walking along the aisles with toys in almost any store these days makes me think that kids these days are left with no room for their own imagination. Why? You can get pre-packed sets of bricks for building a pirate ship or construction site or I don’t know… a town?, all nicely accompanied by a booklet with step-by-step instructions on how to build this house or that house and how this or that could/should look like when finished. 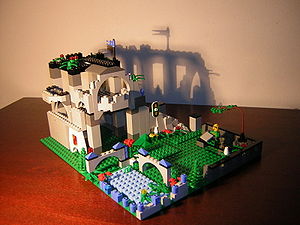 Not so long ago I witnessed a scene with father and girl playing with bricks. Father: “No, not this way, why don’t you follow the instructions to build this house?”
Last week my boyfriend and I visited his niece. She took me to her room and pointed at her LEGO harbor with ships, containers and everything: “Look what my daddy built.” :D

Crazy, isn’t it? I know, I know… kids can still mix and match bricks and characters from different LEGO sets (regardless of instructions), but still…

I don’t quite buy this advertisement about building my own story from simple bricks… LEGO is no longer just a yellow brick, green brick, blue brick or red brick – maybe it still is for some adults but (in my opinion) definitely not for kids –  just look at the variety of products on their website.  :)

The ads appeared on four consecutive pages. LEGO is a company that has fostered imagination, invention and creativity for over 60 years. So it is unusual for these ads to feature only long copy with minimal imagery. 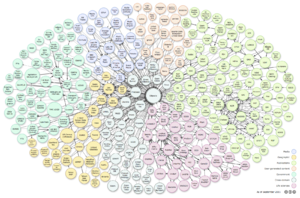 It is time to announce (another) webinar from LOD2 webinar series, this time about OntoWiki.

In September last year I joined Zemanta (allright!) as a researcher… and Zemanta is a partner in a FP7 project called Linked Open Data 2 – Creating Knowledge out of interlinked Data. I already wrote about LOD2 in one of the posts on our blog (you can check it out here).

Upcoming webinar is just one of the webinars in the series describing tools released as LOD2 Stack – tools that will help you (and us) create, enrich, interlink and visualize open data. First webinar (November 2011) was in an introduction to LOD2 Stack, while second one  (December 2011) presented Virtuoso universal server for linked open data.

If you think this has nothing to do with you, think again. :) We all can contribute in this way or another to create new knowledge, better data and share it with others. There are already a bunch of cool projects related to Open data (ever heard about Freebase? Or DBpedia?) and contributing to “open things” it’s a good idea. :)

On January 24, 2012 @ 4p.m. you can participate in third free LOD2 webinar about OntoWiki. OntoWiki is a tool providing support for agile, distributed knowledge engineering scenarios. It enables intuitive authoring of semantic content, it supports RDF, it fosters social collaboration and much more.

It’ll only take one hour but it might change the way you see data for ever… ok, for now :)